These are history books. These two books replace and expand on a previous book, A Chronological History of Early French-Canadian Families: The First 60 Years, which is no longer available.

These books provide a detailed chronological history of early Canada through the lives of the French settlers. All of the families are also documented on this website, as well as many other families not in the books. Because many of the settlers had the same name, special formatting is used to differentiate between parents, children, and grandchildren. Cross-references are used to link families within and between the books. A sequential list of families is presented at the beginning of each book. The numbers used to uniquely identify individual families on the website are also used in the books.

This book was compiled from over twenty years of research. All of the previous history books I read had omissions and errors or were focused on specific royal families. None of the books documented the complex relationships between the various monarchies. My ultimate aim was to concisely document the early history of Europe. This is the third book. The two previously released books described below are about the early histories of England and France.

The multi-book series documents the complex royal relationships of the monarchies of early Europe, including England, Scotland, France, Spain, Hungary, and Germany. Some of the royal family histories, particularly those of Spain and Hungary, are rare in English. There are external links to the website “Many Mini Biographies” with the other family histories that are necessary to fully understand the political pressures under which the monarchies in the various countries evolved.

In tales of kings, queens, and knights, this book uses a new linear approach to describing history by documenting specific chronological events. In the book, there are supporting details of minor players of the history documented on an external website and in other books in the series. This allows for additional reading about individuals of interest. The book begins with the Roman occupation in 54 B.C, followed by a detailed history of the early kings, ending with the death of King Edward III. This ancestry is not completely documented in any other modern book.

A detailed chronological history of early France, 58 B.C. to 1371 A.D., through the lives of the nobility, their marriages, betrayals, rebellions, and wars. There are very few books in English documenting the early history of France. The few that do, do not document events surrounding actual royal succession as in the crowning of Charlemagne or the subsequent end of the Capetian lineage.
Preview the book: History of Early France
Non-Historical Book
Science + God + Humanity. This book presents scientific and archaeological evidence supporting the biblical historical account. Acknowledging commonly cited issues with the biblical narrative, logical arguments are made that point to the truth of the Bible. 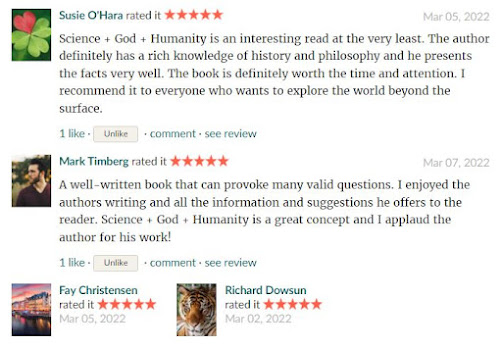 Preview the book: Preview of Science + God + Humanity
About the author: After college Rodney Bond served in the Air Force during the Vietnam era, then worked as an engineer, and then as a high school teacher. As a high school teacher in Texas, he coached student teams to Regional Championships in Academic Decathlon, and to State Championships in Science. In 2010 Rodney was named the MIT High School Inspirational Teacher of the Year. In 2011, he was selected as a Claes Nobel Educator of Distinction by the National Society of High School Scholars.
Posted by Bond0007 at 10:53 AM